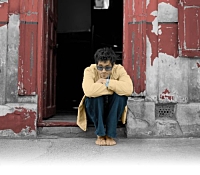 When I arrived to see Ben Taylor at The Spitz, Spitalfield Market, support act Catherine Feeny was already playing. As I knew one of her songs from the Gwyneth Paltrow movie Running With Scissors, I was looking forward to her performance.

While Feeny’s melodies are simple but enjoyable, unfortunately her lyrics are just too depressing. Deception, death, war and heartbreak seem to be her favourite sources of inspiration. Needless to say, after a long day at work and an hour in public transport to reach the venue I was tempted to go home.

But thankfully I stayed for the main act. Son of the legendary James Taylor (October Road) and Carly Simon (You’re So Vain), Ben Taylor has had to fight to create a place of his own and it seems he’s been successful. A gifted songwriter, guitarist and singer, he has the ability to communicate any feeling through his songs and convince any pessimist that he’s talented in his own right. Not forgetting where he comes from, Ben Taylor asked the audience if he sounded like his dad and dedicated a song to his mum.

Talking before each song and telling stories about his personal life, Taylor explained each song’s inspiration. Joking about the English weather, he started singing about the rain and warmed the audience up with My Wicked Way, a sexy song in favour of sex rather than love, where he sings ‘I just want to take you out and get you drunk so I can have my wicked way with you’.

He was joined on vocals by the talented Meredith Sheldon, while Peter Saw oversaw the acoustic section. However, having forgotten his instruments, Saw proved that you can get on stage with a half full bottle of water instead of maracas, keep a straight face and still create nice rhythms.

Together, they played Digest, a song Taylor created from a letter a friend in prison wrote to him. This letter was entitled Another Run Around The Sun and it’s where the title of one of his albums comes from.

With his cool look, nonchalance and smooth voice, Taylor created a relaxed and comfortable atmosphere at The Spitz. The only downside of this gig was its end. Given half-a-chance, I could have stayed listening to his songs for the rest of the night.