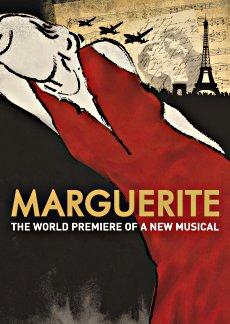 7 May – 1 November 2008
A love story set in Paris during the Second World War, Marguerite draws inspiration from one of the greatest of romantic novels, La Dame aux Camelias by Alexandre Dumas. Marguerite is the beautiful and notorious mistress of a high ranking German officer. Armand is a young musician half her age who falls obsessively in love with her. Their dangerous love story is played out against the background of Occupied Paris.

Marguerite will be the World Premiere of a collaboration between Alain Boublil and Claude-Michel Schönberg (Les Miserables, Miss Saigon and Martin Guerre), the triple Oscar winning musical legend Michel Legrand (Windmills Of Your Mind, Yentl, Summer of ’42) and lyricist Herbert Kretzmer (Les Miserables).

Ruthie Henshall, the award-winning West End and Broadway actress, returns to the London stage to play the title role, with Julian Ovenden as Armand and Alexander Hanson as the German officer Otto.

Buy tickets to see Marguerite at The Theatre Royal Haymarket >>