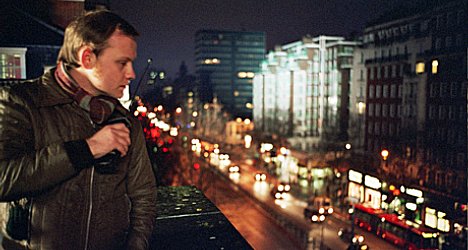 I play a character called Terry Leather, a car dealer who I would say is down on his luck, looking to make a better life for himself in any way that he can and he’s presented with an opportunity to do so.

When we broke into the vault and the safety deposits that was quite an enjoyable moment, we were getting the champagne out and all the boxes, we really tried to get that excitement of what would have really happened in there.

I was able to snoop at the police evidence photographs and the actual tunnel and hole as they came out at the floor of the vault. When you get to see that for real it’s a kind of an eerie feeling, all the time I was thinking ‘wow these guys really did it!’

About the Lloyds Bank set

This was the bank, the very bank itself situated on Marylebone and Baker Street and right next to it, the Chicken Inn which the guys tunnelled under, the shop ‘Le Sac’ the guys rented out is next to that. Trying to shoot the exterior shots is quite difficult in 2007, with a lot of traffic and people sticking their heads where they shouldn’t, so we have had to create the same setting and bank here in pinewood.

He’s probably one of the most easy going people you will ever get to meet and the fact he has made a bucketful of brilliant films gives us the ease to come on set and take direction without even questioning him because he’s such a great filmmaker. He understands different characters, the story telling aspect and the look. He’s just one of the greatest directors I have ever had to work with so I feel very lucky on that side of things.