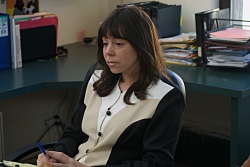 How did you get involved with Precious? Did you see it as a risky move?

I’m very close friends with Lee Daniels. I love the book Push. It changed my life when I read it. A long time ago, he asked me to be a part of it. It’s not risky in my opinion, because I’m not the star of the film. I’m a supporting actress. I feel like it was a freeing experience. It wasn’t about ‘Let me try to be the world’s biggest actress.’ It was about ‘Let me participate in a creative ensemble piece that is something I’m obsessed with, because I loved the book for years.’ And to participate in the movie was really amazing. But it was very difficult to strip away all the glamour and all that kind of stuff, and just go for it from really purely from trying to help the story in whatever way I could serve the work as an actress.

Yes, can you talk about your look for the film and do you think people will be surprised by it?

A lot of people didn’t recognise me, and I was actually happy about that. But it’s not that I was shocked. I knew what we had done. I knew what Lee was going for. He really was smart about that. It wouldn’t have worked if it had been any other way. You know what I mean? It couldn’t have been just don’t wear make up and have your hair to the side. That wouldn’t have even looked the way he wanted. He wanted it to be a complete shedding of skins, almost, and going into this other place and becoming this other woman with a different walk. My speech is completely different. Even the tempo of the way I speak, and the accent of the whole thing. It was like removing masks, as opposed to putting them on.

How did you work on the character of Ms. Weiss, given she’s a social worker?

I felt like I had to make her voice…the cadence had to be really calm. As someone in that job, you would experience so much hectic behaviour. So many things are going to get thrown at you that would floor somebody. People are walking in with stories not dissimilar to Precious, being pregnant by their family members or whatever other things are going on…so I couldn’t just be like ‘Hi! How are you today? What’s going on Precious? Is everything good?’ It would’ve been really out of character for this woman. So to me it was important, especially dealing with Mo’Nique’s character – the mother – that I had to stay strong. She’s such a strong actress and her role is so incredibly powerful, to stay toe-to-toe with her in that scene, without breaking down or allowing that woman to get to me as Ms. Weiss, was my challenge.

You’ve obviously filmed many music videos. Do they compare to making Precious?

Music videos are fun to direct, because it’s not really that deep. I guess you could make them whatever you want, but it’s a completely different medium. With Lee, it’s so the opposite of a music video. I have a friend, Brett Ratner, the director. He’s done the Rush Hour movies and he’s done about five of my videos. He went to see the movie and they screened it for him. He said, ‘It’s amazing. It’s incredible! You broke every Mariah rule that there is! You have her in fluorescent lighting, with the worst angles.’ We tried to do a prosthetic nose as well. But my skin started to make me break out, so it was all red and swollen, and not an ounce of make-up. I tried to put a little blush on and Lee caught me, and he said, ‘No! You’re not having anything!’ And I understand. I had to lose the entire persona with me as Mariah Carey. I hate speaking in the third person but that’s the only way to explain it!

Can you describe what it was like to film that climactic confrontation between Precious, her mother and Ms Weiss?

It was very, very intense, that scene. I love Mo’Nique so much. Gabby loves Mo’Nique so much. But they had this bond throughout the whole movie. And I came in at the end, and I really am an outsider as Ms. Weiss. So I’m sitting there and I have to avoid Mo’Nique in between takes. We could go on a joke tangent for hours and just be laughing. But I really had to avoid her to keep up with what was going on. Between the three of us, there was this thing that was happening. At the end, we all just hugged each other and cried.

The film deals with a lot of social issues, like drug abuse. Do you think this is something your government can deal with?

I don’t even know it’s something the government can control. I think it’s something Lee was so brave to take on as a subject matter. Particularly Push, the book, was such an intense book, you put it down and you’re just staring off into the distance. You’re drained from it. All we can do is do movies like this, and reveal parts of the world that some people are so unaware of. Some people might live in a land of oblivion where they’ve never heard of anything remotely like this. But I actually have, so I’m grateful to be a part of this. Because I think it’s important that everybody – particularly young females – see this.

The film deals with themes of personal strength in the face of adversity. Is that something you can relate to?

I’ve been through a lot that’s made me stronger. They say ‘Whatever doesn’t kill you makes you stronger.’ I’ve been through that kind of stuff a few times. But if we’re going to talk just as an artist, being able to strip away any semblance of who I am. Visually, a persona, whatever. And be very raw and be what Lee wanted me to be, and really try to serve this work, I feel did make me stronger. A lot of people have very different opinions about me. And it’s difficult to face them and to deal with them and to go on to say, ‘No, you’re wrong. I’m this. I’m not that.’ And Precious does that. She goes against what everyone is trying to say to her, keeping her down. What her mother at least is saying, and what her society at least is saying.

At the time of the film, 1987, what were you into musically?

I was listening to more hip-hop, as a radio addict kid. Eric B & Rakim and whatever else was hot at the time.

Your last major role was in Glitter. What did you learn from that experience?

I learned a lot. Here’s the thing that a lot of people don’t know. That movie was released on September 11th, 2001. Could there be a worse day for that movie to come out? I don’t think so. I don’t even know that many people even saw the movie. I don’t think it’s the worst thing ever done. I don’t think it’s the best thing ever done. If I could go back in time and not do it, yeah, I would definitely not do it. But at the time, I was auditioning for smaller roles and wanting to do more independent things. But everybody was like, ‘No, she’s too well known. She’s going to take us out of the movie.’ Nobody until Lee really gave me that chance to shed every single layer of me, the singer, the personality, and go in and really be a new and completely different person and character. So it was a learning experience, and I wouldn’t do it again if you paid me. I didn’t have representation or anyone to tell me, ‘What you need is a great director? Don’t ever embark on something like this without somebody who is way smarter.’ At the time, it was a lot to take on. We didn’t even have a finished script when we were shooting that thing. It was a mess. But this is what I wanted to do, I wanted to do independent film, I wanted to go this route. And I’m just grateful to Lee for giving me the chance.

Where does this desire to act come from?

To me it comes from the desire to express a different side to my creative self. Writing songs is one side and singing and everything, but doing this is something else that I’m just grateful to have, to be able to do for the first time really. I consider this the first time in many ways.