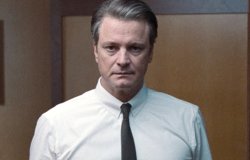 Colin Firth is one of Britain’s busiest actors, best known for his performances on television in BBC dramas Tumbledown and Pride & Prejudice, and films such as The English Patient, Fever Pitch, Shakespeare In Love, Bridget Jones’ Diary, Girl With A Pearl Earring, Love Actually, Nanny McPhee, When Did You Last See Your Father?, St Trinian’s and Mamma Mia!.

Now he stars in Tom Ford’s directorial debut A Single Man, based on the story by Christopher Isherwood. Set in the US in 1962, Firth plays English college professor George Falconer, a man struggling to come to terms with the death of his long term lover Jim (Matthew Goode). Distracted momentarily by old friend Charley (Julianne Moore) and curious student Kenny (Nicholas Hoult), he cannot ignore the profound sense of less he feels and so resolves to do something about it.

Do you see A Single Man as a period movie, in its view of a gay man in society?

I don’t feel, frankly, that all that much has changed. Obviously it’s on a state by state basis in America but the whole business of gay rights are shifting there all the time. Interestingly, we were actually filming on the day when Proposition 8 was passed in California, which essentially rescinded gay marriage rights. And this was the same day actually that Barack Obama won the election.

There is a modern parallel in the climate of fear described in the story, fostered by the Cuban Missile Crisis, isn’t there?

Yes, there’s that theme of fear running through it which George talks to his students about. I think it’s very much alive today, it’s a marketing tool and a political tool. I think it’s how governments get things done. That’s what Naomi Klein talks about in The Shock Doctrine. If you frighten people enough to can get any legislation through, you can make them put with the Patriot Act, or Guantanamo or the invasion of a country that should be left alone. Or indeed giving up your civil liberties, or putting up CCTV cameras everywhere. People are prepared to accept all that if they’re frightened.

Could Isherwood’s story have been updated and put in a contemporary setting?

That’s a very difficult one to answer. I don’t think LA’s changed that much, really. This character happens to be gay, but although George is struggling with a lot he’s certainly not struggling with his sexuality. Isherwood’s characters don’t seem to. So I don’t know what it would have done to the film if you’d have set it in the present. You take the Cuban Missile Crisis out and put something else there, like the fear of terrorism, it’s actually rather an interesting question. I think there’s something about the characters of George and Charley that just feels right in 1962, there’s something about their whole cultural reference points that feel of that generation. But I think you could have updated it quite easily frankly. I just wouldn’t have looked as good.

Talking of the style of the piece, Tom Ford – with his fashion experience at Gucci – makes the film look great, but also delivers strong characters within the story, doesn’t he?

He used all the skills that I think he’d developed as a designer. As he’ll tell you in his other job he has to have a vision and he has to be able to communicate that , he has to be able to marshal people and inspire them to share it and do what you want them to do. Those are very much the skills that are required to direct a film too. He also he has an extraordinary instinct for picking the right people to do the jobs he wants, whether it’s a designer or a make-up person or his cast. If you have a look at him for a moment you realise it would be silly to bet against him on something like this. But I do think there was an emotional cost to him with this, he’s not just proving that he can do it. I feel there’s a lot of him in the story.

How did he relate to his actors on set?

He didn’t give me any verbal instructions really, ever, it was just very clear what was required once we were up and running. When I read the script there was a lot of space to be filled in, there was a lot of stuff without words, but once we were doing it it seemed terribly clear what each moment should be about really. Tom didn’t really need to fling instructions around. I could tell by the room that we were filming in what the mood was, I could see what was on the page. I could tell something by what I was wearing. People comment on the visual beauty of it, I didn’t really notice it as beautiful particularly , it just seemed to be an inevitable part of this world really.

So things like the production design were quite organically arrived at, were they?

Yes, like that beautiful house is something that Tom looked very, very hard for. He wanted it to be the place that George had chosen, because he wanted it to be cosy. But if the scene is me sitting there alone, listening to a phone ringing with a cup of coffee in front of me and the camera outside the window looking in at this lonely man – you don’t need a director to say ‘okay, this is about loneliness,’. I just think that’s brilliant directing.

Did Tom tell you of the cinematographic style he was after, with the screen warming up in moments of happiness?

He might have mentioned it but it certainly wasn’t something he troubled us with. I believe he always intended to do that but some of those decisions he came to afterwards. I like the effect, if you’re talking about the interior life of a human being I think that does help narrate the thing, as does the music.

Given Tom’s reputation as a fashion stylist did you make a special effort for your first meeting with him?

Do you know, you can’t get close. You can’t match him at his own game, and also I don’t think he wants to see a world of Tom Ford clones running around. I know he likes elegance rather than shabbiness. He doesn’t like things out of place. People are a bit self conscious around him, and he does have a way of making people think they’re scruffy. But you know, you can feel scruffy in your best suit and tie standing next to him, he’s so perfect. I came straight from a film set anyway, I was a bit tired, I was a bit unshaven, and in some really rough looking clothes. And I got the part.

Were you aware of his reputation going in to the film?

Only very distantly. I’m not connected to that world, so I didn’t know that much about him. I knew the name, I’d met him a couple of times, I think I knew he ran a bit fashion house but I probably would have struggled to have told you which one. I knew he did glasses, but that was it. And I also knew there was supposed to be something rather extraordinary about him, that he had this ability to succeed at everything.

Pirates Of The Caribbean, Orlando Bloom