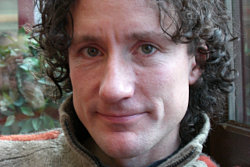 How did the idea for Outlanders originate?
It began with a question: “If you knew that your brother had murdered someone, would you shop him to the police or would you protect him?” I’m fascinated by the intense bonds that exist between brothers, so I wanted to tell a story that tested this love to the point of destruction. In my family I’m the youngest of three; my co-writer is the eldest of four boys, so we had alot to contrast and compare. We wanted to make a powerful moral story based on these ideas.

How did you recruit the Polish cast and crew in Outlanders?
The two leading actors in Outlanders are both Polish, Jakub Tolak and Przemyslaw Sadowski. I spent several weeks in Warsaw meeting every young actor who might be able to do a film in English. Auditioning these two was a sensational experience; they were just perfect for the roles. But they are almost the only Polish characters in the film: the others are Russian, Ukrainian, Hungarian, Latvian, Icelandic, Lithuanian…and a couple of British too. All the extras you see in the film are East European migrants who are living in London, from every country you can name.

There was amazing support for Outlanders from these communities. One Rumanian came to a casting session, holding the script and saying “this is my story, this is my experience”. With the crew, there are several important Polish people involved: my editor, Agnieszka Liggett, our costume designer, Beata Frankowicz, and a terrific camerawoman, Urszula Pontikos.

What do you think the film is about?
Outlanders is about the instinctive, unwavering love that exists between brothers, but it’s also about how hard it is to preserve that love when the world can change two boys into dramatically different men. This is the universal theme of the film. Then there is the specific context of it: Outlanders is set amongst the East Europeans who have come in huge numbers to the UK since 2004. This is something important for me because I lived and studied in Warsaw, speak Polish and love the way our country is being influenced by its latest newcomers.

How do you think Polish people will respond to Outlanders?
I think they will be impressed by two familiar young actors, Kuba Tolak and Przemek Sadowski, giving terrific performances in an English-language film. These are genuinely career-best performances and Kuba recently won the best-actor award at the Ourense International Film Festival for his work in Outlanders. I think that the story itself will be interesting to Polish people, because it brings a young man from Gdansk to London and he encounters the tough reality of the city, which many viewers will recognise. They will also be aware of the contrast between life here before 2004 and after.

Our hero, Adam, can just walk into London in complete freedom, whereas his older brother, Jan, lived and worked illegally during the years before 2004 and he has been embittered by that experience. But I think Polish people will understand that this film isn’t simply about Poles – its heroes do not represent the country, they are universal characters. This story could have been transposed to any big city experiencing migration – Outlanders could be in the US, or in Dubai, or Madrid, or in the coastal cities of China.

What do you hope people will take away from the film?
I wanted to make a film which is both entertaining and thought-provoking. So I hope people will leave the film having enjoyed it, but also wanting to talk about the subject. I have deliberately ended Outlanders with many questions still open. Will Jan escape? Will Anna forgive Adam for his choice? I personally like films which leave me to decide the future of characters and their relationships – it feels respectful when the film-maker gives the audience this freedom. I also hope that British viewers will appreciate the special point-of-view of Outlanders, which is a film about London seen entirely through the eyes of its migrant newcomers. I think it’s always important for us to think about how others see us and this is especially important in such a huge multicultural city as this.