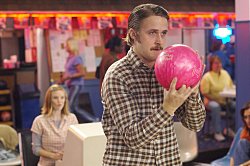 Nancy Oliver first met American Beauty writer Alan Ball when they both studied theatre at Florida State University. They formed a theatre group together and when Nancy was relocated to Los Angeles Ball immediately employed her as a script reader. Some years later she joined him as one of the writers and co-producers behind the acclaimed television series “Six Feet Under”. Lars and the Real Girl is her debut feature…

How did you come up with the idea of Lars…?

It was a “what if?” thing: what if we didn’t treat our mentally ill people like animals? What if we brought kindness and compassion to the table?

Mental illness crops up in “Six Feet Under” too, why is that?

It’s a sort of theme in my life. A lot of people close to me have suffered a great deal from mental illness and when you’re close to it like that, the suffering is palpable. There is a lot of anguish. It’s awful.

So where did the concept of the blow-up doll arise from?

I had a weird job where I had to deal with a lot of websites and a lot of lonely guys. The dolls advertised were so bizarre they stuck in my head, because you can totally see the reason for them. How many people do you know who can’t operate with real human beings? That’s a large part of Lars’ journey: he’s been so deprived of female companionship and motherly love, he’s hungry for that kind of comfort and softness.

Why did it seem such good medicine for Lars?

I didn’t want to go therapeutic with it because it’s not a documentary. He’s finding his way out and he was functional. When someone says “Can you fix him?” the doctor answers, “There isn’t a pill for lonely.” And there really isn’t, and that was the crux of his problem for me.

How did you hear that you were nominated for an Oscar?

I actually heard actually from the director’s assistant who became a friend of mine – she gave me a call. I had asked the publicists not to call me because I was asleep from a trip. It’s kind of crazy for it to happen with a first screenplay, and with something as perverse as Lars…

Because of the writers’ strike you might not get to go, how does that feel?

Considering the issues that the strike concerns … it’s OK. Of course I want to have a big party and get a dress and everything. But my real concern is the issues on the table and our future. Hopefully we can get something together before then, but if not, then that’s all right. It’s an honour just to be nominated.

Is it true that you were just about to give up on writing before starting on “Six Feet Under”?

Yeah, when I moved out to LA I decided that I would give it five years – I’m not a kid anymore. When Alan Ball called my five years were just about up. I was going to go back to Florida and figure out another way to make a living. I had boxes packed when I got the call. I asked him if he could give me some time, but after the first day I said: “What? Are you crazy? Yeah, I’ll do this!” Then I was clearly onboard.

At the world premiere in Toronto. Usually I annoy him by talking through movies. But this time we didn’t even look at each other until the end of the movie. He had tears in his eyes and I was starting to lose it. It was an incredible moment. The movie ended and everybody got up and I thought they were leaving. But they were clapping. That just kind of blew the top of my head off. I had an out-of-body thing because it was just an amazing moment. More than 27 years of just hard work for nothing, and then this. I never, ever thought something like that would happen. Never, ever.