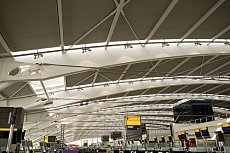 THE QUEEN opens the long-awaited Terminal 5 at Heathrow airport on Friday, two weeks before the mega-structure’s first passengers fly in from Hong Kong.

The subject of 18 years of delays due to the objections and protests of some local residents and environmentalists, the UKP4.3 billion building is seen as Heathrow’s saviour by the airport’s owner, BAA.

“Terminal 5 is a catalyst for the transformation of Heathrow, to confirm Heathrow as Europe’s leading international hub airport,” said Mike Forster, strategy director for BAA.

Designed by celebrity architect Richard Rogers’ company. Terminal 5 features a striking curved roof, acres of glass, luxury facilities and, most of all, size: it is Britain’s largest free-standing structure.

After T5, Heathrow’s other terminals are all being revamped in a programme that is due for completion in time for the London Olympics in 2012. Although it has long been the world’s busiest international airport, European rivals like Paris, Amsterdam and Frankfurt have closed the gap in recent years and are seen as enjoying superior facilities to the London hub.

Partying with Her Majesty in T5’s glassy splendour are some 800 guests including hundreds of the 60,000 strong workforce that built the terminal. Not everyone at the airport is celebrating, however, as T5 is for the exclusive use of British Airways, a monopoly-situation that has drawn the ire of rival long-haul airlines such as Virgin.

“This is a gift for BA,” said Paul Charles, a Virgin Atlantic director.

Terminal 5 won’t increase the total number of flights in and out of Heathrow as there is a cap set at 480,000 per year, which has already been reached, but it is likely to up the number of flights across the Atlantic, one of the most lucrative air routes in the world.

The good news for passengers is that this should lower the price of the typical London-New York flight, especially as a new ‘open skies’ deal between airlines and airport operators comes in at the end of March.

“There’s no doubt that the open skies agreement will lead to some fierce competition,” said a spokesperson for the Association of British Travel Agents.