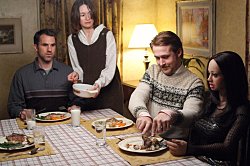 Daughter of esteemed author and barrister John Mortimer, Emily has a wide range of feature credits including Notting Hill, The Kid, Elizabeth, Love’s Labour’s Lost, Bright Young Things, Young Adam, Match Point and The Pink Panther. Currently on stage in New York she will next be seen in The Pink Panther 2.

How would you describe Karin?

She’s immediately stuck in the middle, trying to corral her furious husband while still loving him very much, and wanting he and Lars desperately to be friends.

What were your preconceptions about the movie?

I thought “fantastic, I want to be in a film with a sex doll!” To be honest I didn’t quite know what kind of movie I was in when we started. We just felt our way through really.

What do you think makes Lars… work?

A lot of it is to do with Ryan’s relationship with Bianca. It just doesn’t seem ridiculous, embarrassing or weird. It’s also nice and sweet from the start – it wrong foots all of your expectations. And it’s really moving. It’s an archetypal story about somebody dealing with feelings of loss and grief and loneliness, an inability to cope with the world, and then how he eventually comes to terms with those feelings. It’s a story we’re all familiar with in our own lives. But what makes this fresh and strange and different is the presence of Bianca. She breathes life into it even though she’s this completely inanimate creature sitting there amongst us.

Was it difficult to get the right tone?

It was, because it treads a fine line somewhere between the ground and one foot above it. The absurdity of life can often be very funny so the tone of this was sometimes hard to gauge. And the lines were so brilliant and often hilariously funny, so you had to resist the temptation to play the joke.

Considering the central premise it is quite innocent, isn’t it?

Yes – it was very un-prurient as a screenplay but even less so as a movie. In the script there is a moment where Lars and Bianca actually do make love and we’re downstairs going “‘Oh, God, please, no!”. But they even cut that out. The beauty of the film and sort of the paradox of it is that this creature, who represents the seedier, more sordid side of life, is somehow full of grace and somehow purifying and cleansing in the community.

How was working opposite Ryan Gosling?

He works really hard, but manages to be not at all precious. The one thing that I really took away was how dedicated he is. He takes responsibility for his performance and watches himself on the monitor after every take. I avoid everybody that’s watching me do my thing. I wish I was as brave as him. But it was still amazing that he managed to be still kind of sexy playing an overweight person in galoshes whose only relationship is with a sex doll!

What about your “co-star” Bianca?

She taught me a real lesson: it’s so much cooler not to speak, you get automatic dignity. She sat in the corner never saying anything, and had this sage-like presence. I should have learned that years ago!

Was she a genuine blow-up doll?

Oh yes, and she was real state of the art. She had a tongue, and public hair! There was a real respect for her on set. No one was allowed to make jokes about her, or stick things up her nose. You can imagine the temptation to stick a cigarette in her mouth or put sunglasses on her … or worse! Ryan was extremely careful with her, but I always worried that I was faking it with her.

Notes On A Scandal