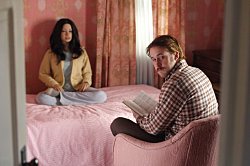 A former “Mouseketeer” (alongside Justin Timberlake, Christina Aguilera and Britney Spears) and child television star, Canadian Ryan Gosling appeared in Remember the Titans before jumping to the cinema-going public’s attention as the neo-Nazi Jew in The Believer. From there his career decisions have been eclectic and interesting (Murder by Numbers, The Notebook, Stay, Fracture) before his Oscar nominated performance in last year’s Half Nelson. He was the youngest Best Actor nominee since John Travolta for Saturday Night Fever.

How did it feel playing opposite Bianca, a rubber blow-up doll?

Amazing. She showed up at the read-through and I just couldn’t take my eyes off her. I found her endlessly fascinating. You think that she’s looking at you sometimes, or that you just caught her blinking. If you could spend 10 minutes with her you could see what I mean; you’d fall in love with her too. I saw her effect on myself and on everybody in crew and on the cast. She’s interesting. She asks you to look at yourself and forces you to be creative and develop a relationship with yourself.

But wasn’t it difficult on set?

Actually I would look forward to our scenes together. When they called “action” it was just me and her – that bonded me to Bianca. I was relaxed when she was on set, she had a calming presence. We just kind of developed this bond where I felt safe in the scenes with her, to the point where I could try anything … do anything.

Did she become real to you?

Yes. It’s a totally different experience reading it to watching the film. She does become real to you because you’re reading it – and when you watch it as a film you realise that it’s a doll, and she’s never going to get real. But Craig (director, Craig Gillespie) said “I’m going to treat her as if she’s got a nudity clause in her contract”. He required that everyone treat her like an actress. She got magazines between takes, she had her own trailer (which she changed in), and when she came on set she was treated like any other actor.

What was your first reaction to the script?

When I first heard of the idea I though it was funny, but there’s no way it can hold up for an entire film. But I was wrong – I was crying by the end of the script. I’d been waiting to read a script like that my whole life; I didn’t want it to end. I read it on Saturday and was committed on Monday. The great thing about Nancy’s (writer, Nancy Oliver) writing is that everything is so clearly laid out for you. The characters are so clearly defined yet but at the same time there is all this room for you to be creative.

How would you describe it now?

It’s very special … a beautiful love story, and very magical in the vein of Harvey or Being There or even Harold and Maude. They’re all movies that are like genres unto themselves. Lars… is a radical film because it believes in peoples’ goodness. There’s nothing cynical about this movie. It wears its heart on its sleeve and believes there’s an inherent goodness in most people. The townsfolk rally round Lars and support him because they get something out of it too. They want to be part of something special.

How did you prepare for a role like Lars?

To me he seemed like he could be one of my uncles. I had to get rid of all the posturing and ideas of what makes me “cool” or charming, and turn up the more vulnerable parts of myself.

So you didn’t care about being attractive on screen?

On no. The only really good performances out right now are female performances – Cate Blanchett in I’m Not There, Marion Cortillard in La Vie en Rose. Women aren’t interested in being sexy any more, and men are. All the guys have objectified themselves and sexualised themselves into being just matinee idols.

Does that mean that you shy away from sexy roles?

Let’s just say that Lars…, The Believer and Half Nelson are the kind of movies I’m trying to make. They’re serious, but have elements of humour to them as well. It’s not just bleak, dark and depressing – that’s just boring. But they are movies about characters that aren’t sexy.

No more romantic parts then?

Personally I think Lars… is even more romantic than The Notebook. There’s something really romantic about a person who chooses to love someone, or something, that can’t love them back; who looks at love as something other than a transaction. I admire Lars: even though he’s very lonely he doesn’t make a choice to be loved, he makes a choice to love something. We’re always practising on each other, and hurting each other. Lars is so sensitive that he does this thing that’s not going to hurt anyone.

Where do his mannerisms come from?

You think you have all these great ideas, and none of them are good at the end of the day. But while you are pursuing those other things subconsciously happen. Like the blinking: we felt that Lars was like watching a movie of his own life. But every once in a while he’d have to be present or say something. This brought him back to his body.

Do you think you have a reputation for being difficult on set?

Possibly, although Lars… definitely was not rooted in conflict. My job is to fight for my character, no matter what. Even if that puts me up against the director or producer. But Craig was somebody I just didn’t have to do that with. For the first week my driver wouldn’t say anything to me. Finally I said “I’ve been talking to you all week and you never say anything back. It’s not nice” And he said “I was told not to talk to you. I heard you were real “method” and I was only supposed to call you Lars and not supposed to look you in the eye”! I was so embarrassed. I don’t know how this stuff gets out, but I really don’t deserve it.

You don’t suffer for your “art” then?

I don’t know what art is exactly, but I’m pretty sure it’s not something you get paid to do. For myself this is a job. I think it’s easier to get better at it if you don’t lose your identity in it. You do whatever you can to try to understand the character. Because they’re paying you feel like you should be doing something. Things like staying in a garage make me seem like I’m super-serious. I don’t think that’s method as much as it’s like I got hired to do a job. It’s like me gaining weight for the role. I’m just doing my job. My body was not the body of a guy who just sat in his garage, so I had to change it.

Did you do any research on guys who have these dolls?

I didn’t. For me Lars doesn’t know that he has one. When you’re a kid you have a teddy bear, and you love that teddy bear. And Lars is a big kid – he’s not moved on.

Did you worry about the reaction that Lars … would get?

You can’t make a movie for everybody. You can’t go into it trying to alienate people, but you have to assume that you’re going to. But Lars… is more like a storybook – like “The Velveteen Rabbit”. It’s not sexual, I think that would turn people off to the film for sure. One of the things Lars and Bianca are always fighting about is that she wants to be physical and he’s not ready.

You sound proud of the movie.

When I was a kid it was a big deal to go to the movies. And when the movie was no good I was really disappointed for the whole week. So I wanna give people their money’s worth, and with Lars… we’ve done that. You’ve never seen anything like this.

Did you base your performance on any other actors?

My first thought after reading the script was “it’s too bad Gene Wilder can’t do this.” Gene Wilder is like my Marlon Brando. Some actors give you serious, or funny, or scary. He gives you everything and you figure it out. There’s also Jimmy Stewart in Harvey – he was acting for him and Harvey, and made Harvey real to you. Like his character Lars has an imaginary friend. It doesn’t matter that she’s not real, because she’s real to him.

Will you work with Bianca again?

Definitely. She’s at my house right now – reading a book by the window. I have a Bianca, and Craig has a Bianca. When they dropped her off at my house I was going out. I thought “I can’t really leave her”. So I brought her out to the bar. As soon as you bring Bianca the whole party livens up!