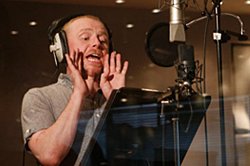 English actor Simon Pegg broke through in the UK with Channel 4 sitcom Spaced, which was nominated for the British Comedy Award and both the UK and International BAFTAs, and received a nomination for an International Emmy Award. He then went on to gain massive critical and commercial success, first with Shaun of the Dead, his debut feature film co-written with Edgar Wright, in which Pegg also starred in the title role, and then with Wright’s 2007 feature film Hot Fuzz. Later that year, Pegg took the lead in Run, Fatboy, Run, which opened in the top spot at the UK box office. He recently tackled his first major blockbuster, starring as Scotty in J.J. Abrams’ smash hit Star Trek reboot, and has just finished the first instalment in The Adventures of Tintin: Secret of the Unicorn directed by Steven Spielberg. He is about to commence production on Paul, a feature he co-wrote and in which he will star alongside his old friend, Nick Frost. Pegg also starred in How to Lose Friends and Alienate People. In Ice Age 3: Dawn of the Dinosaurs, he has tackled his first major animation picture, voicing the character of Buck, a swashbuckling, one-eyed weasel…

I understand you only saw the completed film this morning?

It was extraordinary. I really, really enjoyed it. It was just my wife and myself at the Fox studios in a screening room but we had our 3D glasses on and it was amazing. It is a good film anyway but the 3D really enriches it. It is extraordinary.

How does your character, Buck, the one-eyed weasel, fit into proceedings?

He’s kind of an anti-weasel in a way, because he doesn’t really embody any weasel-ish qualities. He is very heroic, swashbuckling, loyal and daring and utterly insane. Basically, at some point in the past, he’s tumbled down into this prehistoric world that exists somewhere under the Ice Age world that we know in the previous two movies. He has been there for a long, long time on his own and is gradually going mad. In the film, a dinosaur that gets above ground kidnaps one of the Ice Age gang, and the rest of the crew go off following in pursuit. They meet up with Buck and he gradually becomes their guide and their saviour. It was a fun character to play. He’s a bit like a cross between the Artful Dodger and Colonel Kurtz, crossed with Indiana Jones. It managed to stay vaguely sane by focussing on this Ahab-like Moby Dick relationship he has on screen.

How was your first experience of doing an animation voice, acting by yourself in a room?

It is interesting and challenging, not least because you have to cook absolutely everything for your voice. Every aspect of your physicality you have to channel in to get the voice right. You get on your feet and you move around but you have to stay on the mike, so it’s not like you can run around the room and act it all out. You are never with your fellow actors, either, which is strange, but it enables the director to cherry-pick the very best lines. You are just standing with the mike doing the business. It was tiring really. At the end of the sessions after about five hours of shouting you’d be hoarse and completely knackered.

You’re doing ‘Ice Age 3’, a major animation picture, hot on the heels of your first big blockbuster. Does that mean that Simon Pegg has arrived in Hollywood?

I don’t know. It’s weird how it’s used as a gauge in that way. There are plenty of actors who have been in big Hollywood movies, like Jim Broadbent who has been in loads of Hollywood films, but nobody ever says ‘Jim Broadbent’s arrived.’ I kind of aspire to that: he is an actor and he works in lots of different places. The notion of ‘having arrived’ kind of presupposes that you have a game plan, where this is somewhere where you want to get to, like Hollywood is an end in itself when really Hollywood is a place where films get made. And as an actor and a writer you gravitate towards that creative environment.

Were you nervous about the reaction to ‘Star Trek’?

It was quite nerve-wracking going into it because it is such a beloved story and the whole exercise was to reinvent it while, at the same time, not dismissing anything that had gone before. The writers did an incredibly smart job, a real ‘cake and eat’ it thing whereby they were able to reset the whole story without invalidating anything that happened before. They did that by having Leonard Nimoy playing Spock, which meant that everything we knew about ‘Star Trek’ had happened, because it had happened to him. But he’d just gone back and started again. It was ingenious. Still, you never like to expect that kind of major positive reaction, because you never know how the finished film will look. I have done films before where they have felt brilliant on set and then you see the finished thing and it is not quite what you expected. But I had a good feeling because I have such faith and trust in J.J. Abrams. It was so nice to see that the critics agreed.

Have you had any unusual encounters with ‘Star Trek’ fans, or indeed any of your fans?

Sadly, no. In fact, I am pretty lucky in that way. The normal people who come up to me are usually nice and polite. Things do change and you find it hard to operate in the way that perhaps you used to, even in LA for me it is different from how what it was before. But you just adapt. It’s not necessarily a positive thing. It means you have to make decisions about where you go, like at home, I can’t walk into a pub any more without getting stared at and certainly I can’t go in to a pub with Nick [Frost] because we are seen as the ‘complete set’! But that’s par for the course; it’s just something you have to take on board when you get into this game.

Presumably you’ll be hanging out with lots of Trekkies at Comic-con when you shoot ‘Paul’, your next movie?

We are actually recreating Comic-con in Albuquerque but I really wanted to shoot at the real Comic-con. The problem was that it’s such a clearance minefield, because if you are shooting a) everyone that has been shot has to give their permission – and you can do this by putting signs up outside to say that by entering the convention floor you submit to having your likeness used. But also b) all the stuff that is being displayed, all the titles and the comics and the names of the films, you have to clear those with all the legal departments. And of course you couldn’t have a room full of a thousand people and not have one of them look at the camera and go, ‘Ooohh!’

Are you now finished on ‘The Adventures of Tintin: Secret of the Unicorn’?

For now, for this instalment. That’s going to be in the can until 2011 I think. We won’t see that until then, but it was great fun and a real privilege to work with Steven Spielberg. Nick Frost and I were huge fans of his growing up. I met him the year before last. I went to the States to see him on set, just to meet and chat. There was some possibility I would help with the rewrite of the script and he said, ‘Why don’t you be in the movie?’ Which is a funny thing to say to an avid fan! And then I suggested Nick should be Thomson. The first time Nick met Spielberg, we were on the set of the movie and we had some rehearsals and sort of put together a little piece to show and then Steven walked into the room and said ‘Hi Nick’. He sat down in front of him and Nick had to do a sort of little play in front of him, which was one of the most nerve-wracking moments of his life. But Steven is so easy going. He is so willing to talk about his work and we’d sit between takes just chatting about ‘Close Encounters’ and ‘E. T.’ He told us loads of great stories and he was really fun to work with.

What was the best Spielberg story?

The story that he told us, which was fascinating, was that George Lucas came to visit him on the set of ‘Close Encounters’ after he finished ‘Star Wars’ and he was a bit depressed because he felt he’d made a bad. He wasn’t experienced and he wasn’t happy with the film and he felt very down. So he walked on to the set of Steven’s movie, and there were hundreds of extras, and this big runway, and all these lights, and it looked amazing. Then Lucas said, ‘Do you want to trade some points in our films?’ Steven being very laid back said, ‘Okay. Sure.’ So they got their lawyers in to make up a contract and they exchanged two points and Steve’s last line in the story was, ‘I made a lot of money from that movie!’ Lucas actually didn’t think ‘Star Wars’ was going to work. Steven made a lot of money from ‘Close Encounters’ as well, of course, but it’s a great story. Nick and I, when we left the studio that day, we jumped up and down in the corridors for a few minutes because we had just been listening to one of our heroes telling us one of his first hand stories about his work.

How do are you enjoying LA. Would you re-locate over there?

I like LA. It gets a bad rap. It is very easy to knock, because there are elements to it that are facile and it is very image-driven but it is also a very creative place, very friendly and a relaxed place in most areas. And the weather is beautiful and everyone is very polite. I was delighted to discover that I am next-door-neighbours with Rob Morrow from ‘Northern Exposure’, one of my favourite TV shows when I was younger. That kind of thing always happens here. You get these bizarre things that happen. But I love London, and I miss it. I’m looking forward to going back and working on something small after we finish ‘Paul’. My family and friends are there and as a writer you want to be around what you know best. Plus you miss things like the football. Today England played and that would probably have been on at The King’s Head in Santa Monica. I could have gone and sat at the bar and watched it. I am kind of desperate for news from home. I feel I have been away too long even though there’s a healthy little expat community here in Santa Monica. It’s really odd at the moment, because I am working in New Mexico and coming back to LA at weekends, so my wife is here and I say, ‘I’ll be home tomorrow’ but LA is not my home. London is, so it’s weird. I feel as though I am living in three places all at once!