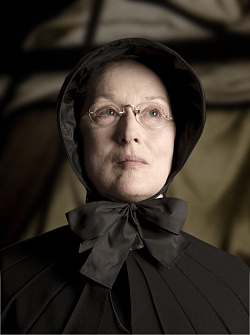 Regularly labelled the greatest actress of her generation, Meryl Streep, 59, is a performer who needs little introduction. Her thirty-year career has seen her achieve fourteen Oscar nominations, beating previous record holder Katharine Hepburn, who has twelve. Winning two Best Actress Oscars for playing troubled mothers in Kramer vs. Kramer and Sophie’s Choice, she has worked opposite a string of remarkable leading men, from Robert De Niro to Jack Nicholson, Robert Redford and Nicolas Cage. In the past year, she has been seen in two politically charged dramas, Rendition and Lions for Lambs, as well as the exuberant hit musical Mamma Mia!

Her latest role, as Sister Aloysius in John Patrick Shanley‘s Doubt, from Miramax Films, is more in line with the classic Streep performances from the 1980s. Based on Shanley’s 2004 play, which won a Tony and Pulitzer Prize, the tale begins in earnest when Streep’s finger-pointing nun accuses Father Flynn (Philip Seymour Hoffman), a colleague at the Brooklyn Catholic School where they work, of inappropriate behaviour with a boy. Dealing with issues of faith, there can be little doubt that Streep’s performance will see her amongst the nominees during the coming awards season. Below, Streep talks about nuns, being called a dragon and why she’s still paranoid as an actress.

Did you enjoy playing a nun?

I loved the nun’s outfit. No bad hair days!

So do you think Father Flynn did or did not abuse the boy?

Your character, though, sees the world in a black-and-white way, don’t you think?

She deals with the world in a very black-and-white way. I’m not sure that she sees it that way. But she has found that it’s most effective to keep the strictures of the church, to keep to the dictates of her faith, to keep children in line, to keep the school running, to tow a very hard line, and to make it right, clear, exactly what is expected.

Have you ever been characterised as a dragon?

Did you ever get taught at school by such a strict disciplinarian?

Yes, I did. I did have one very harsh teacher. I’m sure everybody did. It was algebra. A man. Very strict. Italian. Hard-nosed. And people were scared in that class, but people paid attention, and people learned algebra. People really learned in that class. I had other favourite teachers that everybody loved. I remember nothing. So I mean there is something to focusing the mind, there is something to having discipline in a class.

Did you have any teachers that inspired you to act?

Yes, I had one – she was a music teacher. When I was in high school, I thought she was incredibly old. I’ve since found out she was 22! But she was wonderful. She was a student of Andrés Segovia. She played beautiful classical guitar. She just needed money to pay off her student loans, and was teaching at my public high school, and she was a great inspiration. But she was very disciplined. It’s nice for kids to know that there’s an edge.

So how did you prepare for role of Sister Aloysius?

I just met some of the retired nuns, the remaining Sisters of Charity. There aren’t very many. They’re in their seventies, eighties, nineties. I went to two different retirement homes, had a couple of meals there, spoke with the nuns. Then I spoke with Sister Peggy. She was the model for Sister James. She was John Patrick Shanley’s teacher, in the first grade, when he was six years old. She was around. She’s in her seventies. She’s an inspiring character.

What did you learn from them?

Many, many things. I’ll tell you, I function best when my day is prescribed for me. Like when I know there’s a teamster coming to pick me up at 6.15 in the morning. And I know I have to learn lines for a particular scene, and I prepare for that, and I have lunch at a fixed hour and then we work until the end of the day…those expectations focus the mind and make you more productive in a way. Anyway, Sister Peggy told me that every second of the day is accounted for. There’s a prayer upon waking. There’s a prayer upon rising. There’s a prayer upon dressing. And so, it’s mindful living. You’re aware that you connect every physical act of dedication to the mission of your life. It was interesting; very, very compelling.

Are they still gaining new members for their order?

When I spoke with some of the nuns, they were saying they have no new recruits. No young women. It’s only women who are in their fifties and sixties who have raised their children and feel strong and capable of giving something to the world. They want to make a contribution in this way, clearing everything else aside.

I hear you often listen to music to prepare. Did you for Doubt?

Well, now I’m addicted to You Tube! I have this You Tube video of a boy’s choir in England. They’re very young. It’s not a famous choir – it’s just a boy’s choir in England. But it’s so, so beautiful, and very touching, and a multi-cultural group of kids. Mostly, little white English boys but there was a Filipino boy and an African child, and it had many triggers for me, and I would listen to that all the time. It’s a very sweet thing because these voices are so pure and they identify a moment in a boy’s life, which is just that sort of eighth grade moment. Twelve, thirteen years-old, when they’re very vulnerable. It’s something heartbreaking and beautiful about children at that age.

So do you spend all your time clicking from one video to the next on You Tube?

The problem is, you click on those and you find one really funny video, and you click on the other ones and they’re not funny at all. So I never do that.

Does religion play a role in your life?

I follow no doctrine. I don’t belong to a church or a temple or a synagogue or an ashram.

Do you think the film will draw criticism from the Catholic Church?

I don’t think so. The Sisters of Charity that have seen this have been very, very, very encouraging. I think they’re only on the side of the truth. The right-minded ones. Other people might have problems. It tells the truth about things that happen.

Do you think the Catholic Church is like an ‘old boys’ network?

Well, what do you think? Isn’t everything an old boy’s network? The film industry. The Senate. The House of Representatives. The top echelons of business. What isn’t?

You said before age is humbling. What did you mean by that?

Well, aren’t we all grateful to be alive? I just know lots of people…at my age, I’ve lost a lot of people in my life and I’m very grateful to be here. That’s what I mean.

Do you feel that actors can retire?

Sure. People talk about it. People always think about retiring. I don’t really. In our business, you’re not kicked out necessarily.

There’s been a lot of Oscar talk around Doubt. Do you still get excited at getting nominated?

Yes. I get excited. I get intimidated. Hollywood to me is what it is to you. It’s something other than what I am. I sit outside it. It’s scary.

Where do you keep your Oscars?

Up on a high shelf. One of them is a really terrifying colour now!

What else interests you outside of acting?

Mamma Mia! has been a huge hit for you. It got women back in cinemas, right?

Well, they would always go. They’ve just been discouraged. So many of the decisions are made by people who are not necessarily going to be entertained themselves by something like Mamma Mia! The fellas usually make those decisions based on what they want to see, or what they wanted to see when they were fourteen.

Were you surprised at its success?

No! But they were here. Here they were surprised, because it was difficult to finance, the film. We had some champions, notably a female executive at Universal, Donna Langley. She rolled that boulder up the hill, and a lot of the executives would say, ‘I just don’t get it.’ But she made that happen and that was important.

After that, do you feel you can play any sort of role?

How do you stay so grounded?

I don’t have a production company, I don’t have a staff. I have one assistant and she doesn’t read any scripts. I read the few things that I think will interest me, and I pick from them. My agent sends me the things he thinks are well written, because I get mad when he sends me crap! But he also sends me some funny, offbeat things.

What do you think about roles that are offered to you now?

I think the parts for women my age are wilder, more extreme. The protagonists of a romantic comedy – something very conventional – are written for younger women. I’ve always thought of myself as a character actor, anyway, a theatre or repertory actor – someone who does a lot of different things, and I’ve always liked to. Even when I was younger, I took on some things that were odd – like Lindy Chamberlain [from 1988’s A Cry in the Dark]. One review said ‘The wilful destruction of her beauty.’ I’m interested in people’s lives and I like to investigate the truculent ones, the difficult ones.

Do you always find it easy to get into a role?

It’s more difficult to start because I doubt myself. I always go through a period, after I’ve taken a job…I think about it for a while, then get ready and prepare. And then I stop thinking about it and then the time comes to start. I then just fall apart – I think ‘I don’t know what I’m doing. I don’t have a character. I don’t know why I’m here. Why did they hire me? Why did they want me to do this? I don’t know how to do this?’ It’s really weird. I’ve done it for enough years that my husband has pointed out the pattern and said to me: ‘You always do this.’ I say ‘No, I have never felt like this! It’s this project!’ He just goes on the golf course to get away!

What keeps you sane?

I’ve saved my money and I’m alright. When I was younger, it was more terrifying but not really. I don’t think I ever had a good sense of how on the edge of the abyss I was. You have optimism when you’re younger and I wasn’t afraid. Also, I live simply. I don’t buy a lot of fashion!

How do you manage your career and your personal life?

That’s a day-to-day question! Everything is a balancing act in life, and everybody has to have a sense of humour about what it takes. Really, being an actress in film, if you have a certain amount of success – even if its moderate success – you have a life that’s friendlier to your family because for large parts of it you’re unemployed. So you’re home. I’m home more than most working mothers. It’s the equivalent of flexi-time…except I’m employed and I think I’ll never work again. And then I get another job and I work for four months, and then I stop.

Pirates Of The Caribbean, Keira Knightley