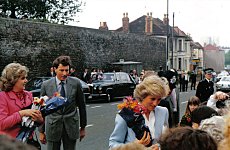 PRINCES WILLIAM and Harry have issued a message of thanks to the jury at the inquest into the deaths of their mother Princess Diana and her lover Dodi Al Fayed.

In an unusual move for the royal family, the two princes joined the public debate, saying: “We agree with their verdicts and are both hugely grateful.”

William and Harry also thanked the inquest coroner Lord Justice Scott Baker, Diana’s former bodyguard Trevor Rees for his evidence and “all those who fought so desperately to save our mother’s life on that tragic night.”

However, the Princes’ hopes that the verdict handed down at the High Court would be the end of the matter look like being dashed with the news that Mohamed al Fayed, Dodi’s father, is considering a judicial review of the case.

Al Fayed, said his spokesperson last night, was still mulling over his response to the verdict and pointedly refused to rule out further legal action.