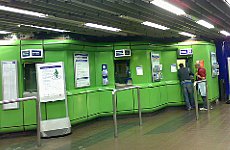 A SECOND UNION has voted for a campaign of industrial action over job cuts by London Underground.

The Transport Salaried Staffs Association (TSSA) has announced that its members voted by three to one for walkouts, while there was a nine to one vote for ‘action short of a strike’.

The announcement comes just a week after the RMT (Rail, Maritime and Transport) Union revealed a big majority in favour of action against the threat to cut 800 jobs in Tube ticket offices.

Their leaders, Bob Crow (RMT) and Gerry Doherty (TSSA), will now meet next week to co-ordinate the campaign of industrial action. The strikes will not take place over the August Bank Holiday weekend say the unions. Instead they are likely to begin from 6 September.

“These cuts are being driven by the Government as much as by Boris (Johnson) so our battle is with Downing Street as much as TfL. We want to serve notice on David Cameron that we are not going to sit idly by while he starts cutting jobs and services in London in the run-up to the Olympic Games.” said Mr Doherty.

The industrial action is being seen as a foretaste of the public sector backlash expected following the Coalition Government’s spending review, due in the Autumn.

Lily Allen Confirms Break from Songwriting and ‘the World’