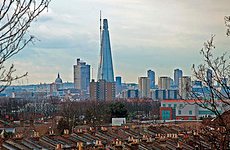 THE SHARD is no longer Europe’s tallest building having been eclipsed by ‘Mercury City’ in Moscow.

Both buildings will soon be bested by another Moscow giant currently under construction called the Federation Tower which will stand at 506 meters (1,660 feet). All three are minnows in the world league of skyscrapers, however, with Dubai’s Burj Khalifa some 2.5 times taller than Mercury city at 828 meters (2,717 feet).

The Shard, designed by architect Renzo Piano, has generally been the most welcomed new major building in the capital since The Gherkin or 30 St Mary Axe (180 meters, 591 feet) by Foster and Partners. The Shard, located next to London Bridge, is set to become London’s hottest ticket when a public gallery known as The View From The Shard opens in February 2012.

More:
The View from the Shard Tickets
Shard of Light to Launch with Laser Show Beamed Across Town