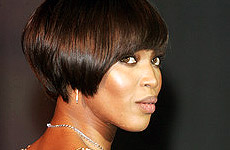 NAOMI CAMPBELL is to use London Fashion Week as a recruiting sergeant for her campaign to help towns and cities affected by the summer floods.

Campbell has teamed up with the Rotary Club to organise a charity event at the Natural History museum tomorrow (Thursday) night, for which attendees will cough up as much as UKP750 to watch a variety of celebrities try their hands at modelling, all proceeds going to flood relief schemes.

Streatham’s own supermodel was in the US when she learned of the watery deluge that forced tens of thousands of people out of their homes into hastily organised community refuges.

“What really got to me was that kids couldn’t go to school at the start of the term and were herded into a gymnasium,” said Campbell. “I thought, ‘What can we do?'”

The answer to that question lay in Campbell’s ability to corral her celeb pals into helping out. Tomorrow night’s models are said to include Boy George, Elle Macpherson and Kate Moss.

Money raised from the event will go to the Rotary Club, an organisation that has impressed Campbell with its efforts.

“I believe every cent raised will go to the right people,” she said.

Our photo shows Naomi at another celeb-packed event – the Montblanc Night Of The Stars Gala in Chamonix, France.

Batman Bale Arrested by the Met