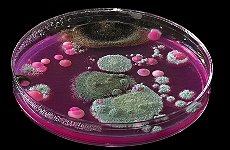 SPLICE, the film about genetic scientists who create a hybrid species, will kick off the Sci-Fi London Film Festival, it was announced today.

Starring Adrian Brody and Sarah Polley, the sci-fi/horror movie was a big hit at the influential Sundance Film Festival.

Splice gets its screening at the Apollo Piccadilly on 28 April, leading a programme of 40 feature films, 25 shorts and a load of themed events that is brought to a close on 3 May by Space chiller Cargo.

Among other highlights of the festival are two links to the written word.