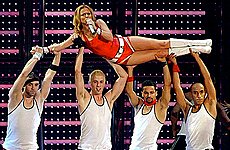 THE SPICE GIRLS plan to sing at the London Olympics, according to Geri Halliwell, but the 90s band now face competition from Girls Aloud for a slot at the opening ceremony.

“Singing at the Games is a great idea and would be an amazing opportunity,” said Halliwell aka Ginger Spice.

“This is our opportunity to show that British music, which has led and dominated the world, should do, always.”

But a younger all-woman band could scupper Halliwell’s hopes of a career revival off the back of the 2012 games: Cheryl Cole’s Girls Aloud are also rumoured to be keen to headline the opening ceremony.

“With the girls already planning to reform next year, Olympic Officials are keen for them to open the games,” a source told M Is For Music.

“They are the biggest British girl group in recent years. What better way for them to celebrate their tenth anniversary?”

‘Dew on the Tracks’ the Latest Excuse for London Train Delays