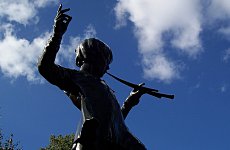 PETER PAN, aka Pedro Paella, flies back to London at the end of this month, complete with songs and second language skills.

Opening at the Garrick theatre on 28 March, Peter Pan El Musical features a 25-strong Spanish cast and 14 original songs. It’s the first West End production of the famous JM Barrie story about the boy who wouldn’t grow up since 2002 and the first ever in a language other than English.

“Our show is quite visual so you don’t really need to understand the dialogue,” said Pedro Espadas, who is due to play Mr Smee in the production.

Peter Pan El Musical is on at the Garrick theatre from 28 March until 27 April. Tickets available here.

Alexander McQueen ‘Killed Himself Due to Grief and Pressure of Work’