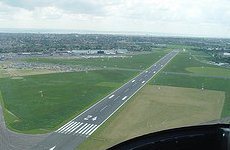 LONDON is to get its sixth major airport in the form of a revamped Southend, from which new base easyJet aim to operate 70 flights a week.

Starting in 2012, the low cost airline will fly to ten European destinations from London Southend, including popular getaway spots like Barcelona, Berlin and Milan.

“Our size means no passenger will ever queue for more than four minutes for security, and as we’re designed the airport only for short-haul travel, with 10 aircraft stands, there won’t be long distances to travel through the terminal.

For easyJet, the company’s customer and revenue director Catherine Lynn said: “We are excited to be opening London Southend as easyJet’s 20th base airport.

“The airport is in a fantastic location just outside London with a fast rail link into the city.”

With that easyJet boost, as well as the London Olympics, London Southend is set to break the million-passenger-a-year barrier next year, halfway to its target of two million passengers by 2020.

Just two years ago, fewer than 4,000 passengers used Southend, though back in the 1960s it was London’s third airport, carrying 700,000 passengers a year at a time when mass air travel was in its infancy.

Southend was taken over by the Stobart group three years ago and has undergone considerable redevelopment since, including an extended runway, new control tower, new terminal buildings and a beefed up rail link to Liverpool Street.

That link will have eight trains an hour, each taking 52 minutes to Liverpool Stret and 40 minutes to Stratford, the 2012 Olympics station.

Boris Johnson Wants to Fly Over London on his Bike