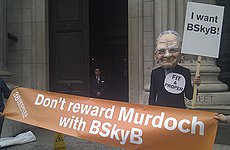 DAVID CAMERON and his advisers are fed up of eating Rupert Murdoch’s sh**, a government source has said.

Under increasing pressure to pull the flush on one-time close ally Murdoch – the man who owned the disgraced and defunct News of the World – the government today put a block on the media mogul’s complete take-over of satellite TV outfit BSkyB.

Previously, Culture Secretary Jeremy Hunt had looked to ease through the take-over, but the stink from the News of the World phone-hacking scandal has forced a rethink.

“We always knew we were going to have to eat a shit sandwich over the BSkyB deal,” a government source told The Independent.

“We didn’t know it would turn into a three course dinner.”

Despite Murdoch’s presence in London today, Hunt has now referred the BSkyB deal back to broadcast regulator Ofcom.

(The photo is from a demo by 38degrees against Murdoch’s take-over, held on Friday 8 July.)