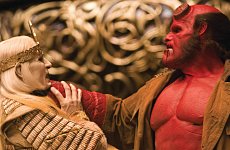 SOMERSET House has established itself as one of the places-to-be during the London summer and today they’ve unveiled a juicy programme of films to compliment the art, music and other goodies on show this time around.

Now in its fourth year, Film4 Summer Screen kicks off on 31 July with the ‘People’s Premiere” of the eagerly-anticipated Hellboy II The Golden Army, directed by Guillermo del Toro, whose 2006 gem Pan’s Labyrinth is also among the movies featured.

Other highlights as the event goes into August include Federico Fellini’s seminal 8 1/2 and musical masterpiece Singin’ in the Rain.

Films are played in the open-air on a giant screen with surround-sound and, if past years are anything to go by, the atmosphere generated is almost as inspiring as the films themselves.

Somerset House will also be featuring a music Summer Series during July, with Adele, Duffy and The Zutons among the big-names making an appearance, as well as visual art treats including Skin+Bones, an exhibition exploring the link between fashion and architecture.

More info on all the events here

Madonna Hung Up on Chopper Ride