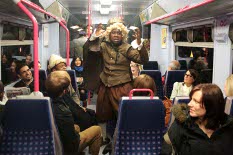 Commuters can now use the extended platforms across Blackfriars rail bridge to alight at either the north or south side of the River Thames. Previously passengers only had access to the north side exit.

To celebrate the opening, two of the biggest acts from the Southbank’s Udderbelly festival and Globe to Globe festival performed the first ever live play on a train to commuters travelling into Blackfriars and at the new south side station itself.

The Two Gents and comedy freestyle duo Abandoman worked with Network Rail to promote the official opening of the Blackfriars Southside station – the first new station to be built on the Southbank for 120yrs.

“The opening of the south station has made Blackfriars a cultural gateway, bringing people on the Thameslink route within easy reach of some of the very best culture that London has to offer. We wanted to make the daily grind of the commute a bit more fun and demonstrate the kind of entertainment that is now directly accessible from Blackfriars” said Laurence Whitbourn, Network Rail’s project director for Blackfriars.