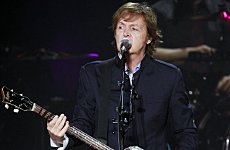 SIR PAUL McCARTNEY was seen kissing US heiress Nancy Shevell as they enjoyed a romantic beach stroll in the Caribbean.

The Beatles legend – who is relaxing at the exclusive Jumby Bay resort, two miles off Antigua, following his bitter divorce from Heather Mills – openly “caressed” Nancy as the pair sat on sun loungers laughing and holding hands.

A source said: “They were kissing each other passionately, giggling and smooching just like any other couple in the throes of a new relationship. They only had eyes for each other. They seemed so happy and relaxed. Nancy seemed to be hanging on his every word.”

Paul, 65, and Nancy, 47, are staying in a UKP6,000-a-night villa which has a plunge pool, four-poster bed, outside shower and complimentary champagne.

The pair – who were first romantically linked after being seen together in New York last November – have enjoyed bikes rides, long walks on the beach and a 45-minute sail in a small dinghy called Sunfish.

Paul’s ex-wife Heather is said to be infuriated after seeing the photographs of the musician and his new love.

A source said: “Heather is not happy. She thinks Paul is publicly celebrating their divorce and parading girlfriends in front of her. She feels angry and humiliated.”

However, Heather’s representative insists she is pleased Paul is moving on, saying: “Heather wishes Paul happiness and all the best in his relationship.”

Nancy, who is separated from her lawyer husband Bruce Blakeman, was close friends with Paul and his late first wife Linda.

Amy Winehouse Fingered as the Money in Husband’s Bribe Case