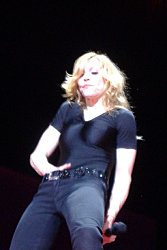 Madonna and Guy Ritchie have been accused of price fixing at their London pub.

The couple bought 18th century pub The Punchbowl in London’s Mayfair six months ago, but it is claimed staff at the venue operate a two-tier pricing system, with tourists being charged more for drinks than locals.

Pub visitor Brian Richardson said: “On Monday I paid £3.50 for a pint, now all of a sudden it’s £3.90. I was shocked. I complained to staff. They have got two prices – regulars’ prices and non-regulars’ prices.

“I don’t mind paying more but it is completely arbitrary. It is not the money, it is the price hike. It is outrageous.”

His friend Andy Kneller added: “When Brian realised how much he was paying he disputed it. We know the governor.

“He did say we have prices for regulars and prices for people who don’t come here very often. He dropped himself in it.”

There is also no price list on display at the pub, which is a legal requirement.

Westminster Council is investigating the claims, which could even lead to the venue losing its license.

Assistant manager Henry Heaton vehemently denied the allegations, saying: “It is not true at all that we fail to have tariffs on display and charge different prices.

“The price list is up on the bar now. What has happened is some of the prices have changed.

“And it is not correct to say that regulars get drinks at better prices than tourists.”

A spokesman for Madonna and Guy said the couple would not be commenting on the allegations.

Law and Order to Reign in London