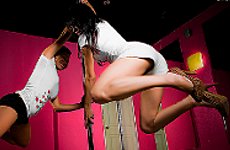 POLE-DANCERS hope to get their event recognised as a sport in time to appear at the 2012 London Olympics.

“After a great deal of feedback from the pole-dance community, many of us have decided that it’s about time pole fitness is recognized as a competitive sport,” said leading British pole dancer KT Coates, whose Vertical Dance organisation is running a petition on the issue.

“What better way for recognition than to be part of the 2012 Olympics held in London?”

There is no chance that pole dancing would appear as a part of the main Olympics, but the International Olympic Committee does allow fringe sports space as exhibition events.

“We need to change people’s pre-conceived ideas on what pole dancing is all about,” reads part of the petition statement.

Those pre-conceptions relate to pole-dancing’s origins in sleazy strip clubs, but pole-dancing has branched out in different directions over the years.

“There are many genres of pole dancing; fitness, sensual, acrobatic, dance, empowering and there is a place for all of them,” said Coates, who specialises in the fitness side.

Perhaps because of its glamour-tinged image, pole-dancing’s ace card for the IOC might be that it can reach parts of the public that traditional sports fail to inspire.

“We know that it has changed thousands of people lives by attracting those that would not normally exercise or even perform and no matter what people think that cannot be a bad thing,” say Vertical Dance.

Coates has received backing from across the world for her 2012 dream.

“There will be a day when the Olympics see pole dancing as a sport. The Olympic community needs to acknowledge the number of people doing pole fitness now. We’re shooting for 2012.”