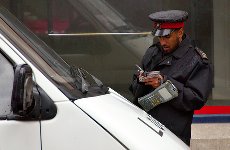 VAN drivers have scored a rare victory over the London parking ticket establishment in the last year, slashing fines by 30% thanks to relaxed loading rules.

The scourge of busy delivery firms, parking fines – Penalty Charge Notices or PCNs in the jargon – were handed out with abandon in the recent past, but an initiative to increase loading times has born fruit, according to the Freight Transport Association, an industry body.

“Some of our members were paying more than a million pounds every year in fines,” said the FTA’s Gordon Telling.

“Added to this was the cost of appeals of administration, placing a huge burden on companies just trying to do business in the capital.”

The FTA has managed to convince nearly all London’s councils – only Richmond is holding out – to increase loading times from 20 to 40 minutes, bringing its members fewer parking headaches and helping their bottom line.

Some firms have cut their PCN bill by 60%, says the FTA, and others have saved hundreds of thousands of pounds.

Councils haven’t had to change tack out of the goodness of their hearts as most have gained from the new loading times regime, too, by cutting their parking admin bills.

The snag for ordinary car drivers could be that parking attendants now have more time to concentrate on their own misdemeanours.