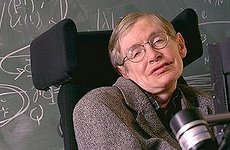 STEPHEN HAWKING, the Queen and the ghost of Sir Isaac Newton are all on the bill for tonight’s Paralympic Games opening ceremony, which features 3,000 other performers and is to be broadcast to an estimated 1 billion people around the world.

Called ‘Enlightenment’, the curtain-raiser takes the Isles of Wonder brief that was so successful for the opening ceremony of the Olympic Games, but focuses more on the UK’s record of scientific discovery, which is presumably where Hawking and Newton come in.

“I really like it,” said Olympics and Paralympics chief Lord Coe, speaking after the ceremony’s main rehearsal.

“It’s really about human understanding, about limitations and the importance of knowledge. You can probably gather what it’s trying to say.”

Where the Queen fits into the enlightenment story is unclear, but she and Will and Kate, aka the Duke and Duchess of Cambridge, will be part of the sell-out crowd at Stratford’s Olympic stadium for the show, which starts at 8.30pm.

Part of the ceremony will be the lighting of the cauldron from flames that have come from all parts of the UK, culminating in a procession through London earlier today that took in the Abbey Road zebra crossing made famous by the Beatles, London Zoo, Trafalgar Square, Tower Bridge and the Cutty Sark.

“London is firmly a Paralympic city and the UK a proud Paralympic nation,” said Coe today.

Hat’s Off to the Queen on her Official Birthday