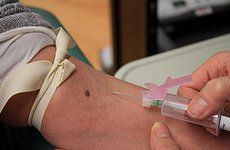 ONE IN TWELVE gay men in London now have the HIV virus, new figures published today by the Health Protection Agency (HPA) have revealed.

London’s HIV infection rate among gay men – 8.3 in percentage terms – compares to 5% or one in twenty among gay men across the UK and 0.15% for the population as a whole.

There are now estimated to be 96,500 people with HIV living in the UK, a rise of 5,000 from two years ago, according to HPA statistics.

It is estimated that about half of the 100,000 people infected with HIV in the UK are heterosexual.

“These figures are a reminder of how vital safe sex programmes remain,” said Dr Valerie Delpech of the HPA.

“Promoting HIV testing and condom use is crucial to tackling the high rates of transmission, late diagnosis and undiagnosed HIV still seen in the UK.

“The good news is that with the excellent treatments available nowadays, if diagnosed and treated early someone with HIV can look forward to a normal lifespan.

“That’s why it is vitally important that anyone who has been at risk gets an HIV test.”

The HPA’s figures come towards the end of National HIV Testing Week and it is hoped the publicity they engender will give the testing programme a boost.