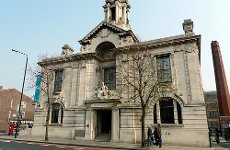 SOME LONDON HOTELS have been accused of ‘extremely brave’ pricing for the period covering the 2012 Olympics.

For brave, read expensive. An investigation by The Mirror newspaper earlier this week found some shockingly inflated prices for next summer’s games held from 27 July to 12 August 2012.

Their reporters highlighted the price per night, as advertised on booking.com, of a room booked for this week at Jury’s Inn in Islington as £139, compared to the same (Olympics) date next year when the rate shoots up to £5,000. In defence, booking.com said the “hotels determine and set the price that they wish to ask for a room, not us”, while Jury’s said it was a ‘typo’ and should have been £500 per night – itself more than a three and a half times hike on this year’s rate.

LondonNet did its own research into some of the bargains available on booking.com and while they seemed to have removed some of the August pricing revealed by the Mirror, we were still flabbergasted by the most expensive price we found. For the opening three nights of the games; Friday 27 July through to Monday 30 July, a suite in the ‘fabulous’ Town Hall & Apartments in Bethnal Green (pictured above) will cost you a cool £54,000. Just in case you though that was a typo, that’s fifty-four-thousand-pounds for three nights. For this weekend (Friday 5 August to Monday 8 August 2011) the rate for the same suite is £9,000 for the three nights. A snip you might think.

Elsewhere in London, The Telegraph has found other hotels offfering rooms at elevated rates. They quote a double room in Knightsbridge’s Sheraton Park Tower costing £209 this August and £605 for the same dates next year.

However, Tom Jenkins, chief executive of the European Tour Operators Association (ETOA), told The Telegraph that he believed such pricing was optimistic.

“Mega events like the Olympics are primarily domestic events that put off travellers from abroad,” said Mr Jenkins.

“Theatres in the capital are banking on a 70 per cent downturn in business during the Games, yet hotels still think they’ll be going gangbusters”.

“In Athens [during the 2004 Olympics] around 15,000 hotel rooms were sold. London has 125,000 rooms to sell. Such optimistic pricing in the face of such disparity is extremely brave.”

The overpricing of hotel rooms next summer meant that London had “lost its status as a gateway to Europe” he added, with long-haul visitors opting to begin their holidays on continental gateways such as London’s arch rivals Paris and Rome.

Last month the Mayor of London, Boris Johnson, unveiled the London Visitor Charter for organisations adhering to ‘fair pricing’ through the games, although the Telegraph say no hotels have yet joined the charter.

Let’s just hope that London hotels learn the lessons of past events and introduce keener pricing in time for next year’s once-in-a-lifetime event.

More:
How much for a hotel room for the London Olympics? (Mirror)
London hotel rates to soar during Olympic Games (Telegraph)
London promises fair pricing to Olympic visitors (MayorWatch)

George Michael: Demise of News of the World is ‘Karma’