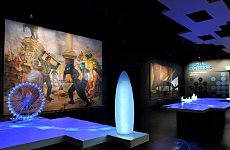 THE MUSEUM OF LONDON goes back to the future tomorrow, 28 May, with the opening of Galleries of Modern London, a major new exhibition tracing the city’s history from 1666 to the present day.

“The new Galleries of Modern London breathe new life into the Museum, bringing together over 7,000 objects from vehicles, costume and jewellery to paintings,” said Professor Jack Lohman, Director of the Museum of London.

“It is thrilling to see this ambitious and complex project realised at last, transforming the Museum and placing it at the heart of the city it celebrates.”

Three years in the planning and at a cost of £20M, the scheme involved the revamp of five of the museum’s galleries and now visitors are allowed a peak at a swanky Lord Mayor’s coach, which is entombed in a new glass extension that gives out onto the nearby road.

Previously, the Museum of London was almost hidden away, but curators hope the extension and the new galleries will draw in extra visitors, especially with the Olympics tourist gold rush in mind.

“[The new galleries] provide a home for the story of London, celebrating the unique spirit and energy of the city ahead of the 2012 Olympics,” said Lohman.

To celebrate the grand opneing, this weekend a selection of short films starring London gets a run out, some from the 19th century.

Galleries of Modern London opens 28 May. Film shorts are on 29 and 30 May. Admission is free.