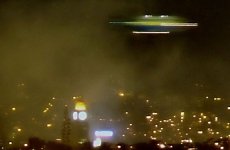 LONDON is a popular tourist destination for UFOs, according to newly released, formerly secret, government papers.

The real-life X-Files date from 1978 to 1987, something of a golden age for ufology and a period during which some of the most believable accounts of strange spacecraft belong to Londoners.

Nick Pope, the man who was in charge of UFO sightings at the Ministry of Defence for 21 years, said: “There’s a sighting actually on Waterloo Bridge, when a number of witnesses actually stopped to look at this UFO that was seen over the Thames.”

“People have this idea they’re seen in desolate, rural places,” he added, “but UFOs are seen in built-up areas.”

Another sighting from 1984 involved three Metropolitan policemen in Harrow watching a spherical UFO “move erratically from side to side, up and down and to and fro.”

Sadly, neither event ended with tea and biscuits with super-intelligent aliens inside a mothership and Pope says straightforward explanations exist for the vast majority of events.

“Most of the UFO sightings here are probably misidentifications of aircraft lights and meteors,” he said, before offering some hope to alien-spotters. “Some are more difficult to explain, and include UFOs seen by police officers and pilots, and cases where UFOs have been tracked on radar,” he said.

UFO papers covering later eras are set to be released over the next four years, as part of the government’s stated commitment to more openness via the Freedom of Information Act.