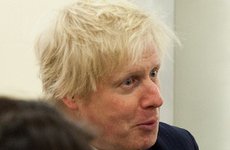 BORIS JOHNSON today added his name to the list of the great and the good forced to say “sorry” following yesterday’s extraordinary revelations about the smear campaign against Liverpool fans, whose only crime was to ask for the truth about how their loved ones died at the Hillsborough disaster in 1989.

In 2004 the London mayor published an editorial while in charge of The Spectator that argued that “drunken fans at the back of the crowd who mindlessly tried to fight their way into the ground” had been behind the disaster in which 96 football fans died.

That disgusting theory had been debunked many years before, but the report from the Hillsborough Independent Panel demolished any lingering doubts.

“I’m glad that this independent report has finally nailed the myth that drunken fans were in any way responsible for the deaths of 96 people,” said Johnson.

“That was a lie that unfortunately and very, very regrettably got picked up in a leader in the Spectator in 2004, which I was then editing.”

Yesterday, Prime Minister David Cameron – who is under threat from Johnson for the Tory leadership – said that people who held Johnson’s previous views “need to come to their senses” and accept the truth of what really happened at Hillsborough.