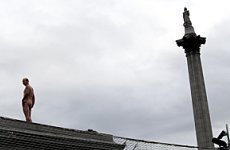 MOST BRITISH men want harder erections, according to a new survey from the London Clinic, but an even bigger proportion of Spaniards have concerns about their solidity in the trouser department.

In the study sponsored by Pfizer covering 12 European countries and over 8,000 people, it emerged that 83% of Spanish men say their sex lives need an extra dose of hardness, 80% of Turks feel the same way, while 76% of Italy’s so-called ‘stallions’ aren’t obvious candidates for the stud farm.

British manhood limped to fourth most worried about flaccidity, on 62%.

The European country with the least concerns about standing to attention is Germany, where only 40% of men say they want harder erections, leading an upright brigade of fellow northern European countries.

“These results show that the hardness of a man’s erection is intrinsically linked to confidence in his ability to please his partner sexually,” said Dr John Dean, Sexual Physician at the London Clinic.

It’s worth pointing out that these results refer only to how men feel about their erections, not how hard their erections actually are. It might be that Spanish men are more honest than German, for instance.

That Flaccidity Table in full: