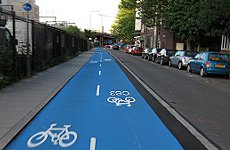 BORIS JOHNSON today opened the first two of the 12 cycle superhighways that the London Mayor hopes will increase cycle take-up in the capital.

The two new superhighways – one from Merton to the City, the other from Barking to Tower Gateway – have actually been in operation, unofficially, for about a month already.

Anecdotal evidence suggests that the distinctive blue-painted cycle lanes have already had an effect with more cyclists braving the traffic fumes.

“You can’t move for cyclists now,” said David Payne, who lives on the Merton – City route or ‘CS7’ in bike-lane parlance.

“Especially in the rush-hour, there seem to be more than ever, though the good weather might have something to do with it, too.”

Johnson and Transport for London see the blue routes as a key part of the aim to increase cycling in London by five times the current level.

“You have got to have a powerful and visible statement on the roads that asserts to every Londoner, whether on two wheels or four, that the capital is a cycling city,” said Johnson

BA Christmas Strikes set to be Called Off Next Week