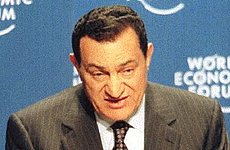 EGYPT DICTATOR Hosni Mubarak’s family has fled to London and the hated President is set to follow them, according to dozens of Twitter reports from the Middle East.

First in the queue to quit Cairo is reckoned to be the President’s son and heir apparent, Gamal, who is said to have brought his family here over the weekend in a private jet stuffed with over 100 suitcases.

Further reports suggested that if and when Hosni Mubarak is finally forced from office, he will join his son in Knightsbridge. Some correspondents suggest the President’s wife, half-Welsh Suzanne, is already here, having flown in either with Gamal and other family members, or separately.

Hosni himself could join the rest of the London Mubaraks as soon as tomorrow, when opponents of the former general’s regime plan to stage a million-strong march through Cairo in another attempt to seize power.

Meanwhile, hundreds of protesters supporting the opposition to Mubarak have gathered outside the Egyptian Embassy in South Street, Mayfair.

Fresh is the Word for a ‘City Transformed’