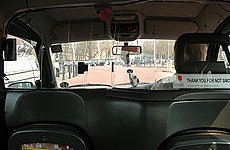 LONDON TAXIS are to become vehicles for popular dissent, kitted out with special sound recording facilities so that passengers can have a good old rant against government policy.

Usually, at least according to folklore, it’s the cabbies that do the sounding off, but now those in the back seat can drive the conversation and have it put up on the internet, via mobile “sound-off booths” before they arrive at their destination.

The cab-rant scheme is the brainchild of campaigners against government plans to cut access to legal aid, which is set to leave tens of thousands of Londoners unrepresented by lawyers.

“The Ministry of Justice estimate that if they make these cuts, 70,000 Londoners alone will be excluded,” said Linda Lee, Law Society President.

“The taxis are a great way of allowing members of the public to join our campaign and to express their views on the planned cuts.”

At first only three London cabs will have the Sound Off For Justice equipment – an iPad, an iPhone and an internet connection – but if it proves popular, we can expect similar schemes to follow.

The nearest Sound Off For Justice taxi can be found on the campaign’s Twitter page here.

“Legal Aid gives ordinary people access to legal protection. This access is in danger of being jeopardised,” said Jagger.

Tube Workers to Vote on Industrial Action Over Pay