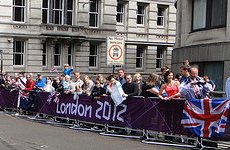 LONDON is to re-visit the Olympics in September, with a Team GB victory parade through the streets in front of an expected crowd of hundreds of thousands of supporters.

The route of the parade has yet to be finalised, but the British Olympic Association said they expect it to run from Guildhall to the Mall to end up at the gates to Buckingham Palace, with Trafalgar Square pencilled in as one of the en-route gathering points. Full details are to be ironed out by the weekend.

All 542 Team GB athletes and their dozens of medals are to be invited to the event on 10 September – the day after the end of the Paralympics – which implies something like 20 open-topped double decker buses for the crowds to cheer.

With nearly a week of the 2012 Games still to go, Team GB has already chalked up 18 gold medals, one short of its total for the whole of the last Olympics in Beijing.