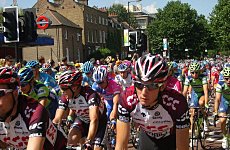 THE WHEELS of industry were oiled by the wheels of bikes this summer as London’s economy cashed in a UKP120 million boost thanks to its role as starting point for the Tour de France.

“The Tour has generated well over UKP100 million in spending and publicity, which will in turn attract more visitors and encourage the organisers of future sporting events to choose London,” said a buoyant Ken Livingstone, the London Mayor.

Like a potential junkie floating after a first fix, the Mayor and his colleagues can’t wait to get high again.

“We are working to bring the Tour back to London as soon as possible,” said Peter Hendy, the transport commissioner for London. “The Tour organisers, media, riders and spectators said it was the greatest start the Tour had ever had.”

Costs of holding Le Tour include the UKP1.5 million fee charged by its French organisers and the as yet unrevealed costs in policing, road closure and the sore saddle body parts of the many thousands of people said to have taken up cycling as a result of watching the event.

Unwanted Olympics Tickets to Be Re-Sold from Midnight