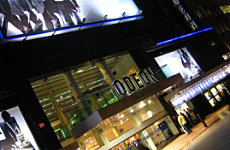 Colin Firth, Rachel Weisz, Thandie Newton, Penelope Cruz and Benecio del Toro are just a few of the celebrities expected at the 52nd London Film Festival, which runs this 15 to 30 October in the capital.

Fifteen films will have their world premieres at the festival, including the new James Bond film, Quantum of Solace. Tickets are fully booked for the 007 showing at the Odeon West End, but that shouldn’t stop countless fans from lining up for Daniel Craig in Leicester Square.

LondonNet has put together a list of 10 films to keep your eye on, and our special festival section includes listing for the rest of the cinematic offerings. Keep checking in for news, reviews and snaps from the red carpet.

Speaking of red carpets, word is that Justin Timberlake is coming as girlfriend Jessica Biel’s guest for the screening of her new film, Easy Virtue. He can stay in the city as long as he likes.

Frost/Nixon (15 and 18 October): Michael Sheen and Tony winner Frank Langella recreate the interview that broke the displaced US president’s silence about Watergate, in the Ron Howard film set to open the festival. Writer Peter Morgan (The Last King of Scotland, The Queen) vividly recaptures the tension between Nixon and his questioner in a production co-starring Kevin Bacon and Oliver Platt.

Tulpan (16 and 17 October): A Kazakh herdsman training to take over his own flock discovers himself while looking for a wife. This visual-knockout drama, set in south Kazakhstan’s Hunger Steppe, took the acclaimed Un Certain Regard prize at Cannes.

Vicky Cristina Barcelona (21 and 25 October): Childhood friends Vicky (Rebecca Hall) and Cristina (a mega-blonde Scarlett Johansson) have different views of what love should be like in the Spanish city. Cristina falls for a charming painter played by Javier Bardem, but as his saucy ex-wife, Penelope Cruz complicates the relationship. Critics are hailing Vicky Cristina Barcelona as Woody Allen’s comeback film.

Sugar (23 and 24 October): Inspired by the classic Field of Dreams, a Dominican baseball player wants to hit the minor leagues in Iowa but doubts his athletic tunnel vision when his skills falter. Anna Boden and Ryan Fleck direct the Sundance-premiered Sugar.

Gonzo (27 and 28 October): One US film critic described Gonzo as “the rare documentary that puts you in a headlock to pin you to your seat”. Director Alex Gibney, who created the Oscar-winning Abu Ghraib documentary Taxi to the Dark Side, takes a detailed eye to the eccentric known as much for his wild lifestyle as his biting political journalism.

Quantum of Solace (29 October): Daniel Craig takes his second turn as 007 in the sequel to Casino Royal. Gemma Arterton struggled to breathe while filming her drenched-in-oil scene, but it seems she’s been appropriately initiated as the latest Bond Girl.

Slumdog Millionaire (30 October): The festival’s closing film sees an 18-year-old Mumbai orphan one question away from winning 20 million rupees on India’s Who Wants to be a Millionaire. When arrested on cheating charges, he reveals a heartrending story of life on the streets and lost love. This Danny Boyle film took Toronto by storm and is gearing up for an equally strong reaction here.