MENUMENU
Home London News Heathrow Queues: Airlines and Government Argue Over Who Should Pay for More... 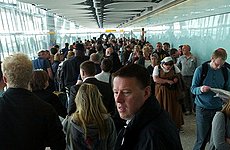 HEATHROW airport queues are set to wind all the way past the Olympics as the government and airlines argue which of them is to fund improvements to the system that makes people wait three hours to have their passports checked.

For the time being and during the 2012 Games, UK Border Force staff are being transferred to Heathrow from other UK airports, but after the summer the government wants to increase landing fees charged to airlines in order to pay for faster checks and shorter queues.

“It is all well and good drafting in emergency staff from Manchester, but what does that quick fix solve?” asked Mary Rance of tourist organisation UKinbound.

“Papering over the cracks is not the answer. What the government must realise is that there is life after the Olympics. The UK’s brand image and reputation is on the line.”

Leading airlines argue that life after the Olympics at the security gate should not involve an increase in the £19.30 landing fee per passenger, which would probably result in correspondingly higher air fares.

“We would be strongly opposed to airlines being forced to pay for extra border staff,” said a Virgin Airlines spokesperson.

Lufthansa and Scandinavian Airlines backed Virgin’s stance, while British Airways wanted talks ahead of a deal and admitted any increase in landing charges would be passed on to passengers in the form of increased ticket prices.

Since the present government was elected in 2010, 10% of the officers in the UK Border Force have been cut as part of the austerity programme and a further 1,550 – almost another 20% – are set for the chop over the next two years.

Met Police Plan to Put the Kettle on Anti-Cuts Demonstrators