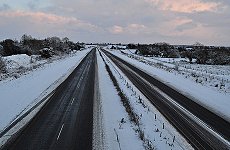 LONDONERS heading out of town for Christmas have been warned that the milder conditions in the capital are not mirrored elsewhere in the country.

“The cold air is not going anywhere fast,” said Matt Dobson, of MeteoGroup, the weather section of the Press Association.

Dobson said that there was unlikely to be a huge amounts of fresh snow in the next few days, but that drivers still faced risks as, “there’s a lot of snow lying around out there so there’s still a high risk of ice particularly at night.”

On the trains, the news for getaway travellers was also mixed. The severe delays of last week unlikely to be repeated, but some rail operators have cut a quarter of their services, so that the rest have a better chance of running on time.

Airports are more or less back to providing a normal flights schedule, but it’s still worth checking flight info before setting off.

Good luck out there, wherever you’re headed and merry Christmas.

Cows on the Line Cause London Commuter Chaos