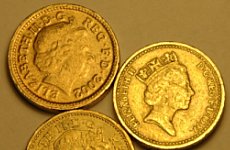 LONDON is awash with fake one pound coins, according to a survey conducted by the Royal Mint.

Close to one in every 33 pound coins doing the rounds in the capital is reckoned to be counterfeit, compared to about one in 40 in the country at large.

Only Northern Ireland posted a higher fake-pound rating than London in the nationwide study.

While London and Northern Ireland are the leaders in the funny-money league, the proportion of fake pounds in circulation has increased across the board.

Just six years ago, the ratio of bad to good one pound coins was approximately one in 100.

“If the public starts losing confidence in coins and notes, you get people refusing to take them,” Robert Matthews, Chief Assayer of the Royal Mint until 2002, told The Independent, which broke the story. “It could damage a lot of small shopkeepers doing lots of small transactions.”

As yet, there appear to be few clues as to the counterfeit culprits, but blank coins from southern and eastern Europe, which are then stamped over here, are among the avenues of inquiry.

“A number of measures are being undertaken by the Royal Mint with third parties to combat counterfeiting, including HM Treasury, the banks, vending operators and law-enforcement agencies,” said a Royal Mint spokesperson.

Top 5 tips for Identifying a fake £1:

1. Check the lettering around the edge – on a fake, this will often be unclear.
2. Many dodgy £1s will be spat out by vending machines.
3. Colour – plenty of fakes have a duller hue than the real ones.
4. The raised Queen’s head on one side and the design on the other should both point the same way.
5. Those raised designs can be less distinct on the counterfeit coin, as in the one on the left in our photo.