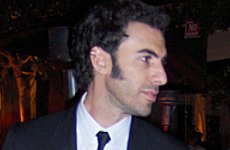 SACHA BARON COHEN and Will Ferrell are set to play Sherlock Holmes and Dr. Watson in a new comedy.

Matt Tolmach, co-president of Columbia Pictures who are producing the movie, said: “Just the idea of Sacha and Will as Sherlock Holmes and Watson makes us laugh. Sacha and Will are two of the funniest and most talented guys on the planet, and having them take on these two iconic characters is frankly hilarious!”

The movie will be written by Etan Cohen, responsible for upcoming comedy Tropic Thunder, and produced by Jimmy Miller and Knocked Up creator Judd Apatow.

This is the second new film about the London-based detective which is due to start production.

Snatch director Guy Ritchie recently signed up to helm a new Holmes movie for Warner Bros. which will be based on an adaptation of a new comic book written by Lionel Wigram.

Guy – whose marriage to Madonna is reportedly in trouble – is said to be concentrating on Holmes’ “skills as a boxer and a swordfighter”, in a bid to change the way he has been portrayed in the past.

Holmes is listed as the most portrayed movie character in the Guinness Book of World Records, with over 70 actors playing the character in more than 200 films.

Tube map by property price unveiled – ‘It’s staggering that a...