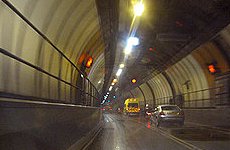 LONDON has waited a long time for a new river crossing and now it looks like two will arrive at once, with the news that links between Greenwich and Silvertown and Beckton and Thamesmead are to get the official go-ahead.

For years, traffic snarl-ups through the Blackwall and Rotherhithe tunnels and via the Woolwich ferry have disfigured journeys north to south in east London, but within an estimated ten years, two new crossings should help matters.

The swankiest is the Greenwich to Silvertown link, planned to cope with 2,400 vehicles an hour, but there is also a new ferry planned between Beckton and Thamesmead, which is set to open for business first, in 2017.

News of the two new crossings was leaked ahead of London Mayor Boris Johnson’s speech to London politicians tonight, where he is due to announce the projects.

“I will make the case for a huge new phase of investment in the capital, including a major new river crossing east of Tower Bridge,” said Johnson.