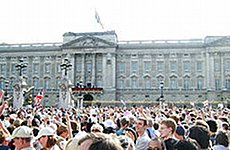 BUCKINGHAM PALACE is to stage a huge public concert as part of the Queen’s Diamond Jubilee celebrations in 2012, it was confirmed today.

Top musicians from around the UK and the Commonwealth are to feature at the event, tickets for which are to be allocated by ballot, though hopefully with less angst than for the current Olympics ticket lucky-dip.

This time next year, 2 June 2012, we’ll be into the start of a four-day holiday to mark the Jubilee, with both Monday 4 and Tuesday 5 designated as official days off.

The Buckingham Palace concert is scheduled for the Bank Holiday Monday and will be broadcast live by the BBC. So far, they’re keeping the acts lined up for the event close to their royal chests.

“All the details are to be worked out over the coming year,” said a spokesperson for the royal family.

Among other events confirmed for London for the Diamond Jubilee weekend is a 1,000-strong flotilla of boats, set to extend seven miles along the Thames.

For more info on the Jubilee celebrations, see the official site.

Bendy Buses: Revenge of the Fallen