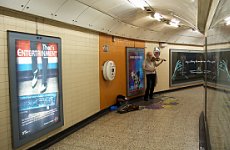 BUSKERS on the London Underground are to be sponsored by Coca-Cola during the run-up to Christmas.

At least 35 buskers will be paid by the giant soft-drinks company to perform Christmas carols alongside Coke’s own new advert-song, called Holidays are Coming.

The campaign starts on 30 November.

Not so many years ago, buskers were regularly moved on and sometimes arrested, but London Underground changed their tune in 2003 and brought in a licence scheme complete with officially marked out pitches.

It didn’t take long for our corporate friends to take note and the likes of Carling beers and Capital radio have already dipped their toes into the buskers’ water.

Nevertheless, Coke is often regarded as the world’s biggest brand, so its endorsement puts the seal on the busking world’s entry into the mainstream.

To be fair, buskers have always followed the money by churning out rock and pop standards by the Beatles, Bob Marley and Coldplay etc, but at least tracks like Hey Jude and Redemption Song have a bit of soul, even when played on an out of tune guitar.

Meanwhile, here are the lyrics to Holidays are Coming: