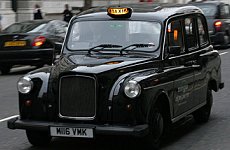 LONDON TAXI drivers have set up a new iPhone app that allows black cabs to be hailed by the power of Global Positioning Satellite, the same technology behind satnav and Google Maps.

Customers need only ‘hail’ a cab on their phone’s app – called LDNtaxi – and the GPS system works out which cabs are available in a two-mile radius of the call.

Next, customers are sent a confirmation message that includes the driver’s photo, cab colour, car registration plate number and the cost of the fare. This time it’s the customer’s turn to confirm and once that’s done, the cab turns up and bob’s your uncle.

“From my soundings, I think thousands of us will on this soon,” said one cabbie.

Over three-hundred drivers have already signed up in the few days the service has been up and running.

To encourage take-up from passengers, the iPhone app is free at the moment, but there are plans to charge for it in the future. No word yet on when any Android version is to be launched.

It is thought the new app could help black cabs in their perennial turf war with minicabs, which are not allowed to be hailed on the street, but instead get their business from bookings.

London Cabbies Say They’ve Been ‘Excluded from the Olympics’