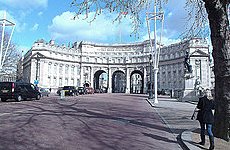 ADMIRALTY ARCH has moved a step closer to becoming one of London’s most exclusive hotels with the publication of the sale brochure for the Grade-1-listed building, price £75 million.

Apart from having the money, would-be buyers also need to convince the government – represented by pricey estate agents Savills – that they will “respect the heritage of the building”, “enable public access” and be ready for “security implications”.

The last of those three could be the biggest sticking point for buyers as Admiralty Arch looks down The Mall towards Buckingham Palace and is a stone’s throw from the government offices of Whitehall.

But that unique location is also the attraction for hotel developers, whose visitors are likely to pay top dollar to be able to say they have stayed next door to the Queen.

As the name implies, Admiralty Arch was used mainly as an office for navy high-ups after its opening in 1912. At one point it was going to be the HQ for the Mayor of London, but then they built City Hall and for the past few years it has been bereft of a role.

“The Government’s objective is to maximise the overall value to the Exchequer from the re-use of Admiralty Arch and to balance this with the need to respect and protect the heritage of the building, now and in the future, enable the potential for public access, and ensure awareness of, and be prepared to respond to, potential security implications.”

Looks like somebody could do with a marketing course