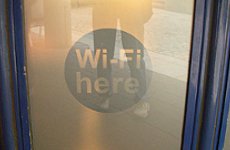 THE LONDON OLYMPICS area is set to get free Wi-Fi, thanks to a deal being done between British Telecom and 2012 organisers.

“LOGOC wants this to happen, as do the mobile operators.”

Mobile phone companies are concerned that their 3G networks won’t be able to cope with the traffic likely to flow at the site, especially as loads of traffic these days is made up of images and videos, which use up more capacity than texts and speech.

Hill estimated that 6GB of information would be carried every second while the Olympics was running, about the same as downloading the whole of Wikipedia every five seconds, calculates Computing.

In a separate development, BSkyB’s Wi-Fi section, The Cloud, yesterday launched a free Wi-Fi service – for 15 minutes a day – in the City of London.

In May last year, Boris Johnson pledged that the whole of London would get free Wi-Fi in time for the Olympics.

But since then little has been heard about the London Mayor’s promise to hook up “every lampost and every bus stop” for Wi-Fi access.

City of London Enjoys Pay Bonanza; Wage Cuts for Everyone Else